The Rough Cut Comics brand kicked off 2013 in a big way when many of our titles appeared prominently on the cult Channel 4 drama UTOPIA, which made its debut on British TV in January. The series opened in a comic-book store, Doomsday Comics, with a member of staff reading our ROSE BLACK title while the drama's sinister assassins arrive to begin their quest for the show's big McGuffin. Artwork for ROSE BLACK: DEMON SEED and FREEDOM COLLECTIVE adorn the walls as the villains terrorise the shop's staff and customers. One last little boy, seen cowering beneath a table of comics, is seen clutching THE SURGEON as the sinister hit-man closes in ... 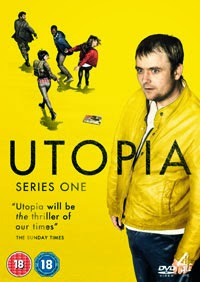 The scene featured in the main promotional trailers on TV and also adverts in the cinema with our titles garnering prominent screen-time. The series' art director had gathered a number of indie titles from the UK, but the show's writer and director LOVED our books and gave them a huge show in the drama. We're delighted to reveal that the show's art director has used our titles again for another new sci-fi based pilot series being produced by C4 for screening in 2014. Watch this space. 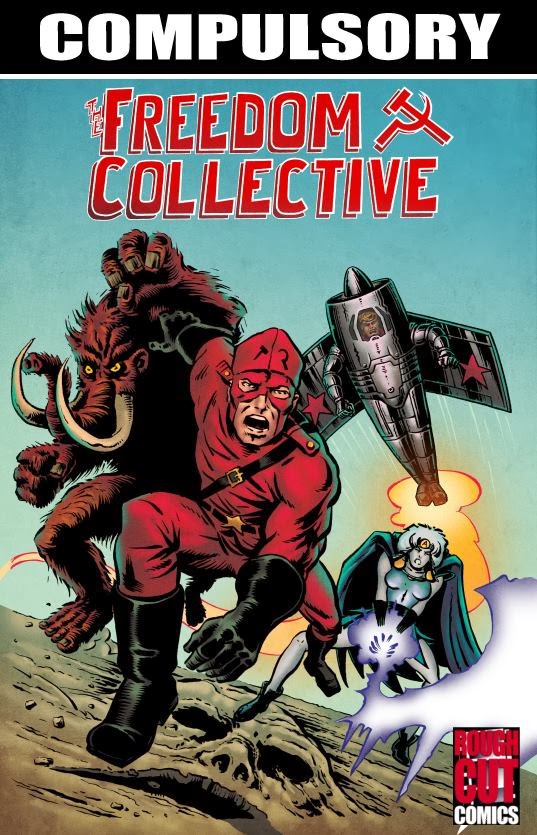 Work was also completed on our FREEDOM COLLECTIVE book (pictured above, left), which was designed to expand our homage to Jack Kirby/Stan Lee era of Marvel Comics. Dom Regan brought his Kirby-esque style to the volume alongside art editor Colin Barr, but the talents of Dave Alexander, Kurt Sibling and Dave Golding were also added to the creative mix which was brought together in a parody of the House of Idea's 'Essential' series packaging. The book was distributed through Diamond Comic Distributors and quickly achieved the popularity of the original one-shot, which was a Top 300 title when originally released.

The city's annual comics festival made its debut in the CCA building and the Rough Cut stall featured in the main hall alongside organisers Black Hearted Press and 2000AD artist Alex Ronald, who has joined our stable of artists with his unique cover art for GOOD COP BAD COP, our first title for 2014. The Glasgow festival provides a genuine outlet for comic-book fans and this year featured a first-class array of guest writers and artists, including John Wagner, Alan Davis, Carlos Esquerra and Cam Kennedy. 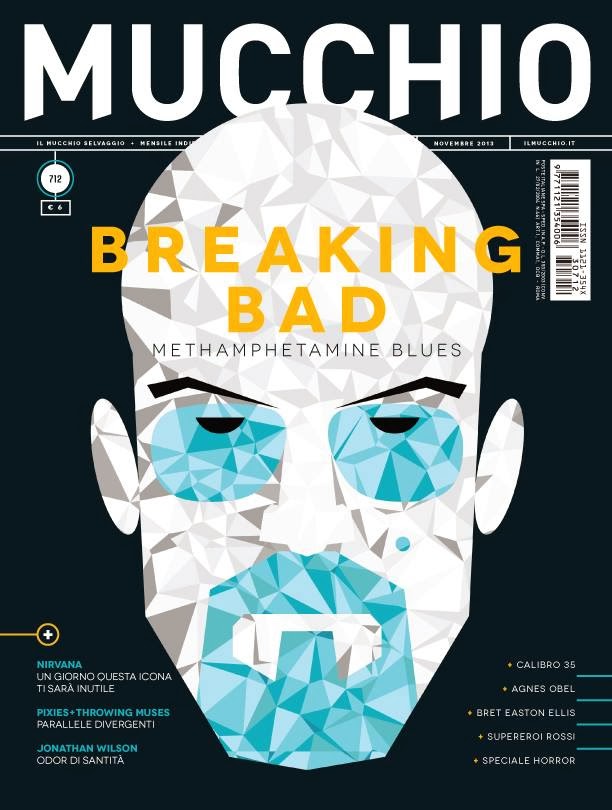 Rough Cut's prominence in Italy was profiled in 2013 when the company was featured in the country's literary equivalent of Rolling Stone Magazine. Our titles sell around 1500 copies in the Rome capital and the popularity of FREEDOM COLLECTIVE was celebrated in the widely-read Il Mucchio magazine (pictured  left), featuring beside stories on Breaking Bad, Bret Easton Ellis, Nirvana, Throwing Muses and The Pixies. Pretty cool company, eh? 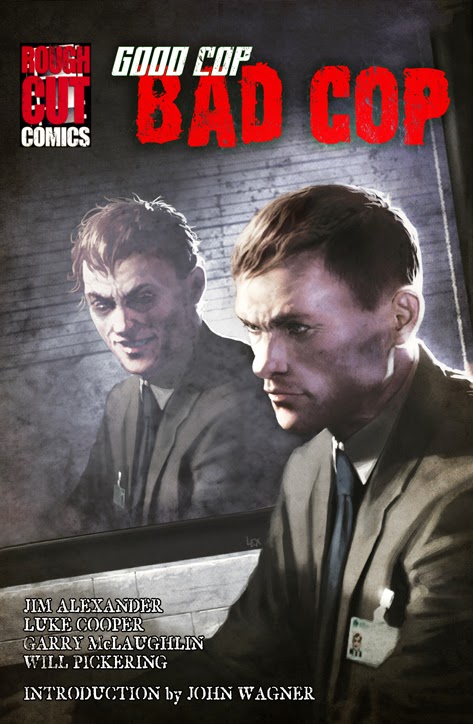 Rough Cut Comics also celebrated the signing of Scottish writer Jim Alexander's GOODCOPBADCOP series, which features the artwork of Garry McLaughlin and Luke Cooper. The high-concept horror-crime opus is Tartan Noir at its finest; and re-establishes the traditional Scottish detective thriller into Jekyll and Hyde territory. Our new trade paperback brings in new art from Will Pickering and a startling new cover from Alex Ronald (pictured right). Judge Dredd co-creator John Wagner provides an introduction to our 68 page volume which will be released in January 2014.

The company is looking forward to celebrating its 13th year as an established independent comic-book publisher. We've been fighting falling sales in the indie market over the last two years; and we're proud to still be able to pay our writers and artists page-rates and maintain sizeable print-runs for our titles. 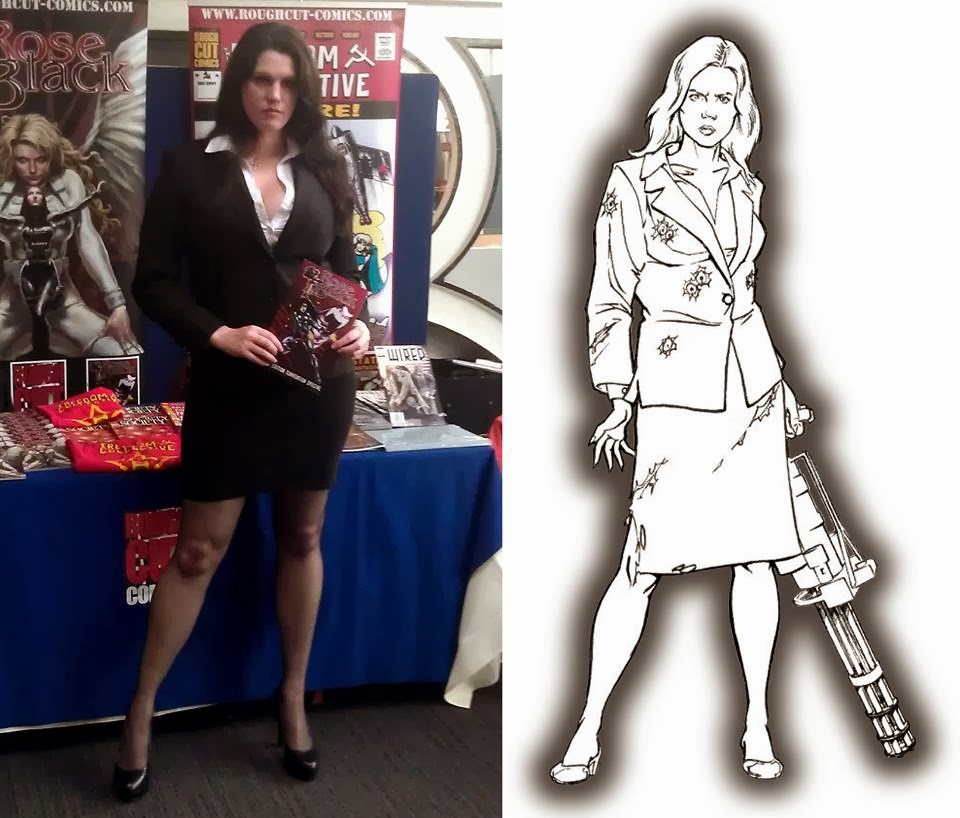 This year, will see our fourth re-print of the original ROSE BLACK book and we expect to see more promotional appearances from our live-action statuesque model  (pictured left) at our booths for MCM and SHOWMASTERS events. Rough Cut Comics will also be making an appearance at Glasgow Comic Con 2014 and the Sci-Fi Comic Weekender in Edinburgh in April. We hope you all continue to stay on our side through Facebook and Twitter ... and support us in anyway you can.
Best wishes for 2014. May all your dreams come true.

NEW FREEDOM'S IN THE WEST ... THANKS TO ROUGH CUT COMICS

IT has taken half a century for the talents of Moscow-based Kremlin Comics to be fully recognised in the western world.
Even as the Berlin Wall crumbled, the Iron Curtain was still being pulled across the alcove cupboard where writer Leiberski and artist Kirbov (alongside a plethora of State-authorised collaborators) created stories depicting super “communist” characters such as The Kremlin Kockroach, The Siberian Six and The Freedom Collective. 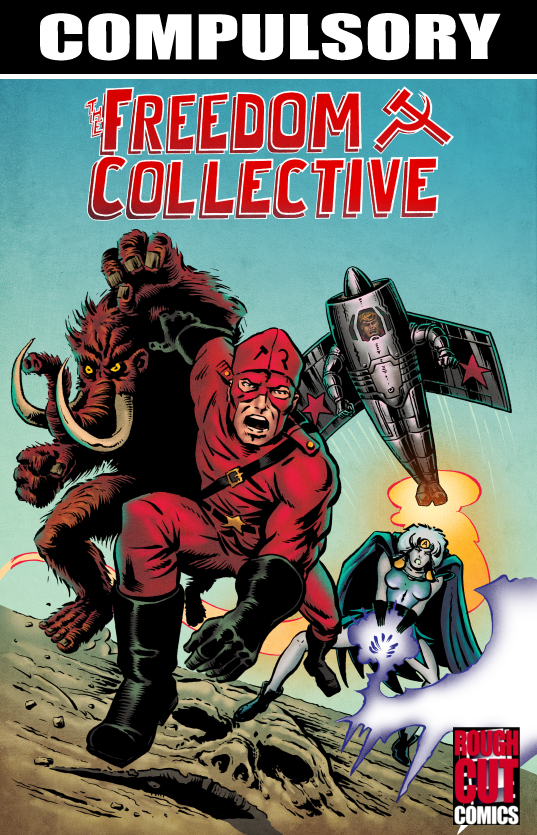 Within the pages of hundreds of publications produced by this dedicated group could be found an entire world of wondrous and dutiful heroes, all standing between the workers under the protection of their would-be capitalist conquerors lurking on the darker side of the Atlantic at the time.
The purchases of these titles were compulsory by all citizens of the States and Kremlin Comics flourished in the Eastern bloc right into the mid-seventies, at which time the decaying government controls eventually forced them into back-street stores and markets throughout Russia.
The early golden days of the comics had more or less been “wiped out” by the old regime … and many historians have spent the last thirty years working together to “unearth” the early pages of Kremlin Comics.
Rough Cut Comics’ Publisher Ed Murphy was an entertainment journalist back in the nineties when he stumbled upon a lead which took him to a contact that had discovered the original artwork of the early Freedom Collective stories.
He preserved this contact right through till he established his comic-book company at the beginning of the new millennium … and as the company rolled out its first roster of titles, Murphy signed an exclusive deal to license Kremlin Comics titles across the world.
Many salvaged comics would be “sweat damaged” due to them having been used by Communist military and civilians alike to pad out their clothing during their more severe winters. The first title able to be fully restored was The Freedom Collective’s 22-page adventure called This Land … This Terror, which pitted the Super-Champions against an evil tyrant who had a passing resemblance to a certain American President of the sixties.
It was originally published as an “ashcan” and distributed at the Bristol Comic Expo in the UK back in 2004.
But Diamond Comics refused to distribute its first-run and many comic-book stores were reluctant to go with the title (there were some whispers in the corridors of power that a shadowy figure named ‘Bullet’; - a British agent known to have been trained by the infamous Lord Peter Flint – had visited some shop owners and dissuaded them from stocking the title).
But at a tremendous cost, Rough Cut Comics self-distributed in the UK and US and soon received reviews in The Jack Kirby Collector and Wizard Magazine back in the day. Over the following three years, it gained an incredible following from comic-book fans.
When re-submitted to Diamond in 2008, it became a monster-hit through its listing in their Previews Magazine … receiving orders which ran into the thousands.
Two of its biggest fans were artist Alex Ross and writer Grant Morrison.
If you haven’t yet stumbled across this fabulous slice of comic-book history, you are still able to purchase the last remaining copies of the 32-page Freedom Collective: This Land … This Terror from Rough Cut Comics’s online distributor UKonDisplay: http://ukondisplay-com.mybigcommerce.com/the-freedom-collective/

In the meantime, fans of “Communist’s Mightiest Super-Heroes” can stand-by for the brand-new trade paperback which collects a handful of stories into a 76-page book.
The collected edition – The Compulsory Freedom Collective – will bring to life the forgotten world of valiant character, including Ivan Karnage, Agent of KRUSH and the Siberian Six.
The book will be shipping into comic-book stores in August 2013 through Diamond Comics. It should be available from UKonDisplay after its first-run distribution. Spread the word … you just can’t beat these types of Freedom’s in the indie comic-book world. You can find out more about Rough Cut Comics and The Freedom Collective at:


https://www.facebook.com/roughcutcomicsuk
Posted by Ed Murphy at 09:19 No comments:

Ed Murphy
Ed is the Publisher/Editor-in-Chief of Rough Cut Comics, the UK-based independent comic-book company who produce The Surgeon, Rose Black and The Freedom Collective titles.